Pride is a call to action!

The following is the prepared text of the speech Lead Trainer Ramona Peel delivered at the Yellow Springs Pride Kick-Off event on June 27, 2019:

I’m honored to speak with y’all tonight. Pride means a lot of different things to people. It’s a celebration of who we are—a collective shout that we are here, not just as individuals, but as a community that will no longer politely accept being mistreated and dehumanized.

It’s a venue for self-expression. For many people, including myself, a Pride Parade or festival might be the first time one is “out” in public as their authentic selves. It might also be an experience that gives an LGBTQ+ person a nudge (or a shove) out of the closet.

It’s a commemoration of loved ones we’ve lost—from our friends and family members who lost their lives to HIV/AIDS, to our siblings who we’ve lost to horrific violence, from Matthew Shepard to Brandon Teena, to those who perished at Pulse, to Dana Martin, Jazzaline Ware, Ashanti Carmon, Claire Legato, Muhlaysia Booker, Michelle ‘Tamika’ Washington, Paris Cameron, Chynal Lindsey, Chanel Scurlock, Zoe Spears, and Brooklyn Lindsey. We honor and remember these 11 black trans women, as well as all other members of the LGBTQ+ community that we have lost so far this year. Beyond that, we also solemnly recognize the other things we can lose just because of who we are or who we love. Lost friends. Lost family members. Lost lovers. Lost opportunity. Lost TIME. 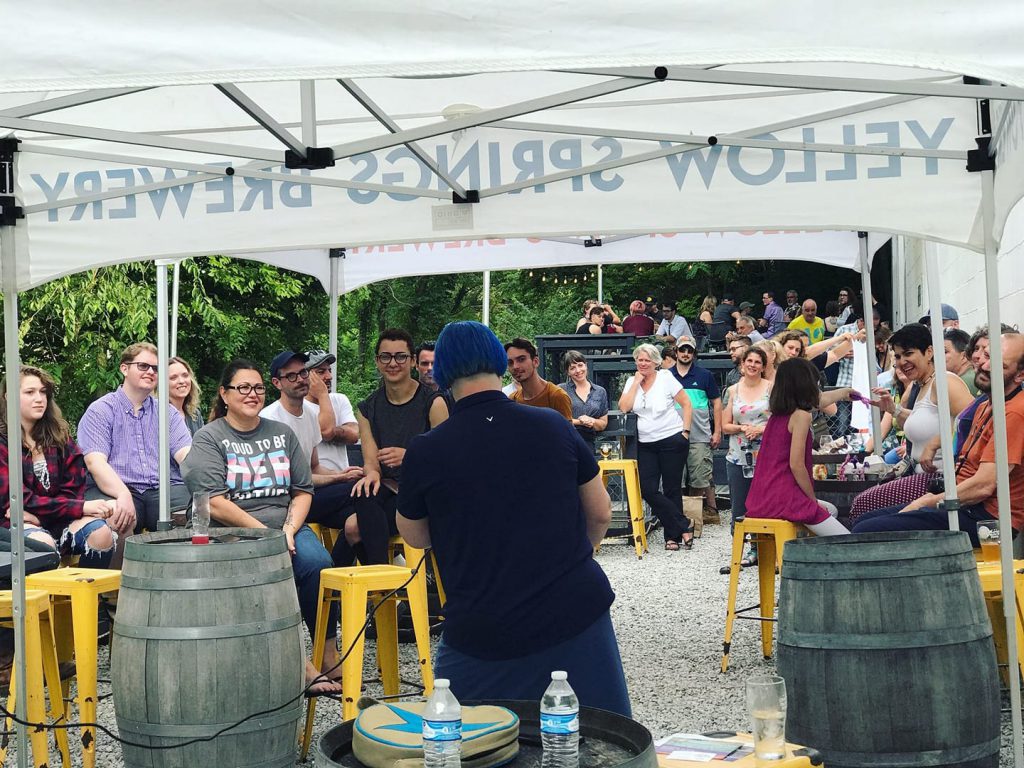 More than anything, Pride has always been a call to action. It’s often said that the first Pride was a riot—and that’s true. The Stonewall Uprising WAS a galvanizing moment for members of sexual and gender minorities across the globe. I’d like to talk tonight not only about Stonewall and its legacy, but also about what led up to the rebellion, what it has led to, and about the hard work we have ahead of us to complete what began when the first bricks flew at the Stonewall Inn 50 years ago this month.

The Stonewall Uprising is an event that has passed into legend in our community and beyond. Briefly, I’d like to lay out the context in which the rebellion occurred, and the major events of the rebellion itself.

In June 1969, it was quite literally illegal to be an LGBTQ+ person. In nearly all of the United States, same-sex personal displays of affection, or dressing in a manner that didn’t match the gender norms associated with your sex assigned at birth, could result in being charged with a crime. Being outed as LGBTQ+ could result not just in legal peril, but also in the loss of relationships, of careers, and of basic needs like housing.

In New York City, it was common for the NYPD to raid gay and lesbian bars like the Stonewall Inn. One such raid occurred 50 years ago tonight. Eight undercover officers entered the bar and arrested Stonewall employees, drag queens, and other people violating a law against “masquerading” as a member of the “opposite sex.”

A crowd began to form around the Stonewall Inn, and witnessed police loading those arrested into vans. Lesbian activist and drag king Storme DeLarveire was arrested, hit on the head with a billy club, and handcuffed. Bleeding from a head wound, she yelled at the gathered crowd “Why don’t you so something?” Two trans women of color, Marsha P. Johnson and Sylvia Rivera, resisted arrest and, by multiple accounts, began the physical resistance to the NYPD by throwing bricks and bottles.

By 4am, the NYPD had retreated from the swelling crowd and barricaded themselves inside the Stonewall Inn. Rioters used parking meters to try and break through the door. Others threw beer bottles and even homemade firebombs.

On June 28th, the Stonewall reopened, and that night, a crowd yet again gathered around the bar. The NYPD beat and teargassed members of the crowd until the early morning hours, dispersing the crowd. Despite this, crowds still gathered at the Stonewall for several additional nights, taking advantage of the moment to spread information and build the community that would fuel the later growth of the gay rights movement.

Media coverage was rife with homophobia, and festooned with insults and slurs. On July 2nd, a crowd gathered to protest the coverage by the Village Voice. Rioting began anew, but was over by midnight. The Stonewall Uprising was the catalyst for the explosive growth of the LGBTQ+ movement that would follow.

A year later, in June 1970, The Cristopher Street Liberation March capped off New York’s first Gay Pride Week. In the years that followed, the gay Pride movement swept around the country and the globe, and today, hundreds of cities worldwide hold Pride parades and festivals. In Ohio alone there will be a total of 15 Pride parades and/or festivals this year, including Yellow Springs.

In the popular imagination, the LGBTQ rights movement began with the Stonewall Uprising. This isn’t just a misconception—it’s a dangerous misconception that fuels another corrosive myth: that LGBTQ+ folks have no history—that we are a new phenomenon.

Variations in gender identity, gender expression, biological “sex,” and sexual and romantic orientation have been part of the story of our species for eons. They are only seen as abnormal or deviant through a lens clouded by homophobia, transphobia, and patriarchy. This shared experience of bias, prejudice, and discrimination is a major factor that binds sexual and gender minorities together into the LGBTQ+ movement. From antiquity up through the enlightenment, there is ample evidence that LGBTQ+ folks existed, even if their societies pushed them to the margins—or worse.

LGBTQ+ folks haven’t just faced persecution—we’ve also faced attempts to erase us from history. Perhaps the most unsettling example of this is the fate of the Institute fur Sexualwissenschaft, (or, Institute of Sex Research) in Germany before World War II. Between the wars, Berlin had a thriving LGBTQ+ community, and, under the leadership of Magnus Hirschfeld, the Institute not only did groundbreaking research, but it also provided a safe harbor for LGBTQ+ Germans. In particular, its progressive attitude on gender issues, including the first modern application of hormone replacement therapy + gender-affirming surgeries, set it apart. But that also made it a target for the Nazi regime.

In May 1933, the Nazis destroyed the Institute and its research, and later used the institute’s records to hunt down, imprison, and murder members of the LGBTQ+ community. This is a chilling illustration that efforts to marginalize, erase, and even destroy the LGBTQ+ community are nothing new.

In the US, the postwar era saw a significant increase in LGBTQ+ activism, led by groups like the Mattachine Society and the Daughters of Bilities. They fought for equality and acceptance in a particularly-hostile Cold War environment. To name just one example—between 1947 and 1955 alone, 1,200 people were expelled from US government jobs on the suspicion of being gay—a sad precursor to “Don’t Ask, Don’t Tell” and the current administration’s ban on trans folks in the military.

The US government would fail the community again during the AIDS crisis. Not only would President Reagan fail to mention AIDS publicly until 1985, he would also fail to take any meaningful action against the epidemic during his Presidency. It was only via direct action by LGBTQ+ individuals and groups such as ACT UP that the government and the pharmaceutical industry were forced to act. The HIV/AIDS pandemic decimated a generation of LGBTQ+ people and robbed the world of thousands of friends, family members, lovers, artists, and activists. It also, along with the Stonewall Uprising, was a moment that radicalized the community and spurred it into action.

Max Weber once said politics is the slow boring of hard boards—and over the last thirty years, the progress of the LGBTQ+ movement has been simultaneously impressive but incomplete. We’ve seen fundamental changes in society, but we are also frustrated by the amount of work left to be done.

HIV/AIDS is no longer a death sentence—we have the tools, today, to, if not eradicate the disease, at least defeat its ability to destroy lives. However, these tools are not available to everyone—particularly to members of marginalized groups.

We can marry the people we love, and have those unions legally recognized by the state. At the same time, in most of the country, we can still be fired or denied housing because of who we love.

Trans and non-binary people are more visible than ever, and in some places have found acceptance and have access to gender-affirming care. But trans women of color live under a constant threat of violence. And right here in Ohio, the state refuses to let trans folks have their Authentic gender markers on their birth certificates.

Young people are more likely than ever before to identify as LGBTQ+, and that demographic trend shows no sign of slowing. But the current political climate has not only created an atmosphere of dread, it has also emboldened those who hate us and wish to do us harm.

So what does the future hold? What shall we do? Most obviously, we need to keep boring those hard boards. We need to elect officials who will push for LGBTQ+ equality at the local, state, and federal levels. We need to run for office. We need to vote, not just at the ballot box, but also with our feet and our dollars.

We can’t stop, though. The reality is that there will always be work left to do. That is where we find the spirit of Stonewall—even when faced with overwhelming odds, even when burdened by oppression, we fight, and we fight for each other. We don’t say “I got mine.” We don’t pull the ladder up behind us.

Pass the Equality Act? Great! Keep working on eliminating racism within the LGBTQ+ community. Equality under law matters little when systematic racism limits your ability to make a living wage, or secure, stable housing, or to be free from the threat of police violence.

Create more welcoming and inclusive environment for trans folks? Awesome! Still need to work on the same goals for our non-binary siblings—and not to mention our intersex friends, our asexual and aromantic neighbors, and so on.

In this fight, we must never forget the struggle and the pain of those who scratched and clawed to get us where we are today—but we also have a generation of LGBTQ+ youth who will apply their energy to the next battle, then the next, then the next.

That’s what fills me with hope. Our community is incredibly resilient, and when we combine the collective experience and wisdom of those who have seen darker days with the energy and drive of the young people, outraged by the status quo—

I see nothing but victory in our future.